https://isl2021lymphology.com Dear Friends, With the history and valuable experience gathered from the past 27 International Congresses of Lymphology, we are very excited to be organizing the...
Read more
Belgian Scientific Events

After considering and thoroughly evaluating the currently available informations and the many communications that we have received, it has been decided that it is...
Read more
News from ESL

Dear Colleague, In the midst of this strange new world we are living in we wanted to update you on the progress of LYMPHOQOL, the...
Read more
European Journ of Lymph. 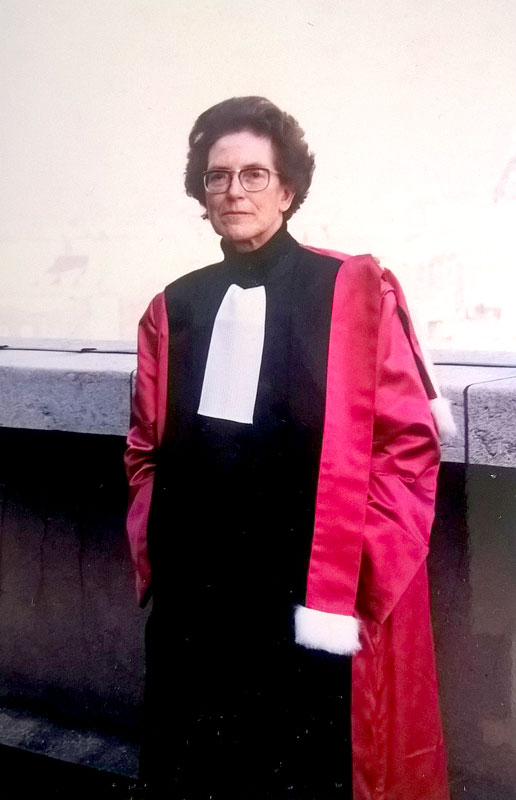 The  daughter of Geneviève HIDDEN doctor Françoise LUCET  phoned me immediately to inform the lymphologist colleagues and friends of the death of the great anatomist and surgeon.

Geneviève HIDDEN was born in 1926. She obtained the grade of medicine doctor in 1958 at the faculty of medicine of PARIS. Immediately she was fascinated by anatomy , dissection, cadaver research and particularly the teaching of anatomy on the blackboard. She obtained the title of chief of clinics in surgery in 1959 and was nominated professor of anatomy  in 1969 in the faculty of PARIS and surgeon of hospital in 1971.

She taught anatomy  during 30 years at PARIS OUEST and became chief of the service of general surgery of the hospital of POISSY. Her surgical activity was focused on oncology. But the name of prof. HIDDEN   will remain by her important anatomical research of the lymphatic system of digestive and pelvic tract, the lymphatic system of the lung and thorax.

Her master prof André  DELMAS  understood this opportunity very quickly and gave to Geneviève the possibility of a research of high quality. Prof M.PAPAMILTIADES  ten years before had been also a pupil of André DELMAS. The personality of Geneviève HIDDEN was very important for me.

In 1977 I saw her for the first time in the European congress of anatomy in BASEL.   I wanted to speak to her of my thesis upon lymphatic drainage of the stomach  but I  was timid  and impressed by her. She was very kind with me and promised to help me. One month after I received a very long letter with advices  (I have yet this letter with me) and an important bibliography.

In  1979, we decided in BRUSSELS  with Albert LEDUC,  Isidoro CAPLAN and  Pierre  BOURGEOIS to create the Groupement pour l’étude Des Lymphatiques GEL which became  some years after the European Society of Lymphology   ESL.

Immediately  we decided to propose to Geneviève to become founder member of the executive committee in 1980. In  may 1983  in the 4th European congress organized in FREIBURG  by Michel and Ethel FOLDI, after  Albert LEDUC  founder president, the executive committee of GEL decided unanimously to elect  Prof HIDDEN  president of GEL.   She was an excellent president with a high level of scientific organization during the congress of BRUSSELS 1984, PORTO 1985, NIMES – MONTPELLIER 1986. In 1987  she decided to let the presidency. She proposed to her general secretary to take over,  I was the general secretary, and it was a very great honor for me to be elected on proposition of prof HIDDEN.

Genevève  HIDDEN  published many  papers on surgery and anatomical lymphology; she was interested by physiology  of lymphatic system, by all aspects: physiotherapy, reconstructive surgery. In PARIS  She gave the taste of lymphology to many pupils: M.RIQUET, JP BRUN, C.BECKER, P.GLOVICZKI. She was  member of the international society of lymphology, of  the executive committee, of the editorial board of the European journal of Lymphology.

Geneviève was a” woman surgeon” in a peculiar  period in FRANCE: it was difficult! She had her personality with her special cigarettes….but a very great attachment for all her family, her husband gynecologist  and the children Philippe and Françoise

We are all proud to have been the pupils of a woman of   very high morality in the practice of medicine. She left us at 90 years  old but we are convinced that she was at the last minutes happy of her life, her family, her colleagues, her pupils, and the European society of Lymphology  honors one of the most important founder member and transmit to her family  his sincere condolences.

The International Society of Lymphology (I.S.L.) had been existing for several years at that time but . Read More

Ph.D.M.D. Francesco Boccardo is the President. You may write him clicking here

M.D. Marina Cestari is the responsible for web content. You may write her clicking here

Domenico Perrone is the webmaster. You may write him clicking here

Click on the EmailButton to email President of International Society of Lymphology.
Read more

WELCOME TO BARCELONA   Dear lymphologists, lymphedema activists and colleagues, We would like to personally welcome you to the 26th World Congress of Lymphology. The 2017 conference...
Read more

43rd ESL Congress. Thank you everybody.

Biography of Robert Cluzan (updated with ppt in memoriam)