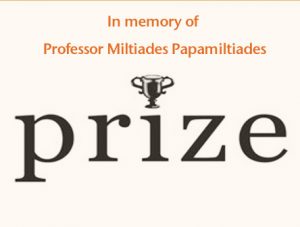 In memory of Professor Miltiades Papamiltiades , anatomist and physiologist of sherrodbrown.com the lymphatic system, is established by the European Society of Lymphology, for the year 2011, a Prize of € 500 each, which will be awarded to the two best works to be presented on the pathophysiology to the 37th Congress of the Society to be held in Warsaw on 3-4 June 2011.

Entry:  Applicants should submit (deadline April 30, 2011) their work in full (to be published in the European Journal of Lymphology, the official organ of the European Society of Lymphology) concerning the lymphatic pathophysiology,

The judging committee will be composed as follows:

Who is Professor Miltiades Papamiltiades?

Extraordinary Executive Committee of the Society.